Following the unprecedented spike and collapse in global cotton prices almost three years ago, market participants from producers to consumers to policy makers are still coming to grips with the fallout. Although technical and fundamental factors still impact the market, their effects have been more muted than in the past. Instead, policy dynamics now overshadow traditional considerations and may continue to loom over the market well into 2014.

A Cacophony Of Trumpets …
Several evolving fundamental factors are pushing and pulling the market to and fro. On the supply side, as the Northern Hemisphere harvest approaches its conclusion, speculation is rife over differing production forecasts. Reports in recent weeks of generally favorable harvest weather across the American cotton belt are pitted against concern that after a dry spring, more acres may have been abandoned than earlier expected. Just the opposite is occurring in India, as prospects for a record harvest have improved over recent months. The heavy monsoon and recent rains are expected to increase yields and production there, but late-season rains have delayed cotton arrivals. Evolving sentiments for perhaps larger or perhaps smaller crops in different markets compete for the market’s fickle attention. 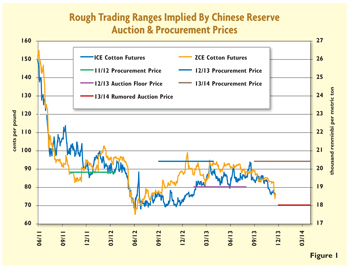 Click here to view Figure 1 in a new window.

Similarly, on the demand side, various issues across the global textile supply chain continue to jockey for prominence. Even though the largest spinner in the world — China — expects to produce a record volume of yarn in 2013, man-made fibers rather than cotton are the underlying winners. Rapid gains in Chinese cotton yarn imports are supporting foreign spinners including Thailand, the Indian subcontinent, America, and elsewhere. And while prospects for Indian cotton mill demand are not as upbeat as they were a few months ago, the country still expects to spin an unprecedented volume this marketing year. Similarly, the 2013-14 record cotton consumption outlook for markets like Vietnam and Bangladesh still appears underestimated.

Further downstream, offsetting drivers at the fabric, apparel and retail stages do little to elucidate the outlook for cotton prices. While China is set to produce and export a record volume of cotton cloth this year, U.S. cotton fabric exports are on track to fade to a 20-year low in 2013. At the apparel stage, improving foreign demand is driving garment output in markets like China, Bangladesh, Vietnam and Turkey this year, while Honduras and the Philippines are set to produce fewer clothes. At the end of the supply chain, shoppers in retail markets like America and China are set to buy record volumes of clothing in 2013, but much of Europe remains in a persistent funk, offsetting increases elsewhere. Indeed, gradually softer growth prospects for the world economy are weighing on the outlook for global cotton mill demand.

Away from typical supply and demand fundamentals, other dissonant issues also are trumpeting for attention. The dollar is nearing a nine-month low, a factor often supportive of prices of dollar-denominated commodities like cotton. The volume of certificated stocks for delivery against Intercontinental Exchange (ICE) cotton futures is rapidly rebounding off seasonal lows and presently stands at the highest season-to-date volume in four years. And the seasonal swoon of cotton prices remains a perennial issue not to be overlooked. Indeed, myriad factors internal and external to cotton are competing to set the market’s melody.

… But Chinese Cotton Policy Resonates Worldwide
But beyond the din of these offsetting bullish and bearish trumpets clamoring for the market’s attention comes an unmistakable, resonating pitch overshadowing all others. This overtone emanates from China, and its impact permeates the global cotton market. In particular, the China National Cotton Reserves Corporation (CNCRC) has aggressively procured – and sometimes sold – sizable volumes of cotton in recent years. This mechanism to stabilize the domestic cotton market continues to impact prices and trade far beyond China.

Previously, China used its cotton reserve system merely to balance domestic supply and demand. Policy changed in early 2011, when a procurement price was introduced to stabilize price and plantings, sparing domestic farmers from the worst of the global price collapse. Unfortunately, the initial procurement price was set as global cotton prices fell from record levels. The CNCRC has had to continue to buy cotton at this price to support the market. China typically has held the most cotton for decades, but its stockpile has ballooned in recent years to record highs. The CNCRC has been unable to auction the supplies as rapidly as it has procured new volume. Estimates vary, but some sources indicate China may have some 58 million bales stockpiled, a staggering 62 percent of total global cotton inventories. This mountain of cotton is arguably the single-biggest issue facing the market.

Clearly, the procurement and auction mechanism has had far-reaching and sometimes unintended consequences. The scheme was instrumental in stopping the plunge in Chinese prices as well as world prices. As the graph in Figure 1 shows, introduction of the 2011-12 procurement process at 19,800 renminbi per metric ton (RMB/mt) coincided with the abrupt end of the plunge in futures prices both on the ICE and in China. High prices paid by the government for procured cotton also turned domestic mills against the artificially expensive Chinese cotton, causing Chinese mill demand to plummet even though yarn spinning is likely headed to a record year. Ironically, China began sourcing unprecedented volumes of cotton yarn from overseas, driving increased yarn output in a host of foreign mills. The back-and-forth combination of procurement and auction periods in China has effectively established a long-term trading range of sorts for ICE and Zhengzhou Commodity Exchange (ZCE) cotton.

Any changes to this policy are likely to resonate across the global market well into 2014. For the third autumn in a row, the Chinese government is purchasing cotton supplies from domestic growers. Since the process commenced in early September, reserve procurement has exceeded 1 million mt, but is still far off the year-ago procurement volume. The buying will add to the already-bulging state reserve.

Chinese mills remain hopeful that the reserve auction may resume soon, a process that again may return some of this excess cotton supply to the market at lower prices. Rumors are swirling of a December start with an initial auction price of 18,000 RMB/mt or less. If auction prices presumably are well below the 2012-13 average, the process could establish a much lower level of support to the global market well into 2014. Prices already are edging lower in anticipation, with both ZCE and ICE futures recently plumbing their lowest levels in months. How much additional cotton will be procured this season and any terms regarding a looming resumption of the reserve auction remain unknown for now. But the issue of the Chinese state reserve is likely to be the major driver dictating global cotton prices and trade well through this marketing year, keeping the world cotton market on edge.