After 2009 in Shanghai, this year’s ITMF Annual Conference, organized by the International Textile Manufacturers Federation (ITMF), Switzerland, will be held again in China, this time in Beijing, the capital of the Middle Kingdom, October 16-18. Over the last few years, China has become an increasingly important key market. Textile World talked to ITMF Director General Christian Schindler, Ph.D., about the conference, and ITMF and its role in the global textile industry. 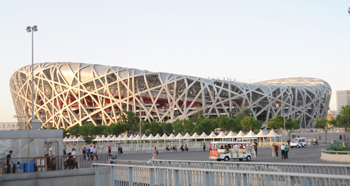 The Event
TW Asia: The theme of this year’s conference is “Shared Responsibility – Shared Opportunity.” What should be the vision after the negative outcome of the most recent World Trade Organization (WTO) negotiations?

Schindler: We see the main theme as an indication of the responsibility of the entire value chain in the textile industry. The importance of partnerships is becoming increasingly more important than isolated analyses of individual companies or industries. That’s why every stage of the textile value chain from fiber up to making-up is always represented at our conferences.

TW Asia: WTO’s latest Doha Round of trade negotiations ended badly because of India’s veto. What do you want to communicate after this outcome?

Schindler: It is not the job of ITMF to comment on individual decisions or on trade policy implications. 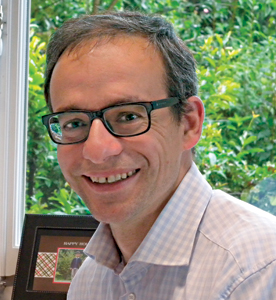 Information Platform
TW Asia: How do you see the role of ITMF in today’s global environment?

Schindler: ITMF is the platform for the global textile industry to exchange information. Even in the age of modern communication tools, the personal contact in a casual atmosphere without any hassle is still indispensable.

TW Asia: Do all sectors of the textile industry have the same level of importance for ITMF, or is there one that matters more than the others?

Schindler: No, we value them all at the same level. When ITMF was founded in 1904, naturally, the cotton industry was the first spin doctor. However, in the last 10 to 20 years, man-made fibers have become increasingly important, and now play an important and most valued role. In addition, of course, this also includes the apparel industry.

TW Asia: What is your personal challenge for the next congress?

Schindler: As every year, we hope that the participants are both professionally and personally satisfied with the event, and that they will go home with a bouquet of new ideas and impressions.

Market Situation
TW Asia: How do you see the current market situation for the textile industry?

Schindler: That depends very much on the general economic situation and the gross domestic product (GDP) of each individual country. Far more than in other industries, in a weaker growth phase the budget for apparel is cut first. Although the long-term prospects are good for consumption, population growth, GDP growth and higher per capita consumption, the current structural weaknesses of the global economies must be overcome first. Therefore, entrepreneurial skills in the context of the macroeconomic circumstances regarding national frameworks are today very much in demand.

TW Asia: What are the present problems for ITMF members?

Schindler: Well, cotton prices are still an issue, especially due to the huge global inventories of around 22 million metric tons (mt). China alone is holding approximately 12.5 million mt of cotton in stock; this is a huge number. If you consider that the estimated annual consumption is some 24.5 million mt, one can imagine the consequences. Furthermore, the cotton industry is still waiting for the fixed cotton policy of the Chinese government for the near future. Of course, we hope that we will get some news from the Chinese delegates in the fiber meeting at the conference in Beijing.

ITMF
TW Asia: Why should an organization or a company become a member of ITMF?

Schindler: ITMF is truly independent of governments and is a nonprofit organization. We have a long tradition of independence, which is reflected in the fact that not only textile manufacturers are members, but also people and organizations from other areas of the industry, such as fibers, chemicals and machinery.

TW Asia: Can you say some welcome words to the conference participants?

Schindler: With pleasure: The last few years have indeed shown that China is not only a major producer of textile products, but rather an increasingly important key market. This is the reason why we are again in China this year after 2009 in Shanghai. We expect more than 400 delegates from all over the world, which allows an extensive exchange of opinions and experiences. Therefore, to all participants a very warm “Nihau” and welcome to Beijing. 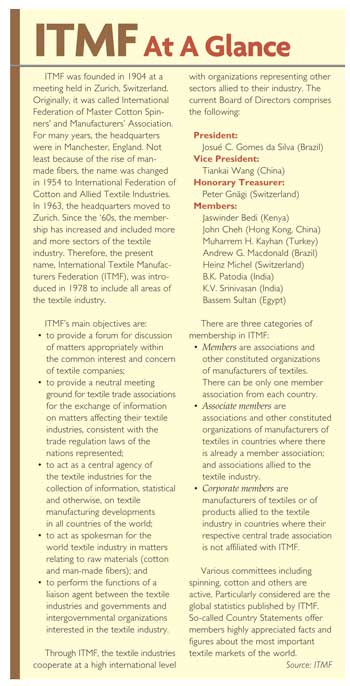 For more information about the ITMF Annual Conference 2014, including the conference program, visit itmf.org.