In recent years, Germany-based Trützschler Group has completely realigned itself. The company has advanced from being a successful provider for spinning preparation to being a specialist offering a complete production program for machines and systems for fiber processing in the spinning and nonwovens industry. In this process, nonwovens are playing an increasingly important role.

Durables And Disposables
In nonwovens, a basic distinction is made between durables and disposables. Durables — products that are not used in the disposables sector — include geotextiles, roofing membranes and other such products. Disposables are primarily single-use items such as diapers, hygiene products, wet wipes and much more. Disposables are produced in very large quantities by companies specializing in these items. They are mainly made of spunlaced, or hydroentangled, nonwovens; spunbonds; or needle-punched nonwovens.

Left to right: The finished pulp and 6- to 12-millimeter Tencel® fibers are shown on a sheet of the nonwoven material.

Waste Problems
Now, Trützschler Nonwovens has possibly accomplished a significant coup that could solve a big problem facing the nonwovens industry: what to do with the waste? Disposables are produced in enormous quantities all over the world. Often, these throw-away products are no longer disposed of in regular trash, but rather are thrown into the toilet. This results in enormous problems in the entire chain of wastewater recycling. The disposables clog whole line systems and also prevent bacterial action to reprocess the wastewater.

For a number of years, nonwoven producers have been trying to solve this problem — so far with little success. On one hand, the production method is an obstacle because the product requires a certain strength. And on the other, the fiber material used is of decisive importance. Both components together form a product that must be strong and at the same time must dissolve through mechanical interaction after its use. This has long been the problem of squaring the circle. Now a solution seems within reach. 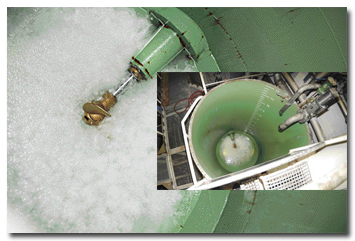 Water, pulp and Tencel® fibers are added to large containers (inset); and are carefully stirred.

Paper And Spunlace Technology
Some months ago, Trützschler reported about a new cooperation with the market leader for paper machines, Voith Paper, a subsidiary of Voith GmbH, Germany. Initial talks were held more than a year ago. As with many great solutions, the concept is very simple: the combination of two different production technologies. One technology involves the wetlaid process, which is similar to paper manufacturing technology. Wood pulp, primarily from beech trees, is dissolved in water, passed over a sieve, drained, calendered, and dried. This method is also used for wetlaid nonwovens. The other one uses Trützschler’s spunlace bonding technology. In this process, the fibers are bonded using water jets after web formation. A combination of both technologies could present a breakthrough for nonwovens that can be mechanically dissolved in relatively short time, thus no longer creating problems in reprocessing. 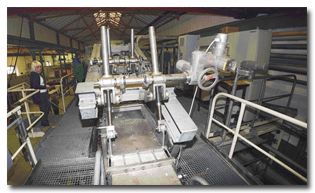 It All Depends On The Blend
After extensive testing, both partners decided in favor of the following fiber blend: 80-percent wood pulp and 20-percent very short 6- to 12-millimeter Tencel® fibers from Austria-based  fiber producer Lenzing AG. The pulp makes the product very absorbent and lightweight, and the Tencel fibers practically hold the nonwovens together. A sophisticated production technology produces the desired, preferably isotropic machine-direction:cross-direction (MD:CD) ratio. Keeping both values nearly balanced, as close to 1:1 as possible, results in an ideal product.

The author was able to check out the functionality of the product, or its flushability, in the Trützschler Nonwovens laboratory in Egelsbach, Germany. What, actually, does flushability mean? Nothing other than the ability to be flushed. After a short mechanical interaction, the web dissolved into its fiber parts, thus allowing clean disposal or disintegration in the wastewater treatment plant. Pulp and Tencel are both products made of wood that do not disturb the bacterial action. 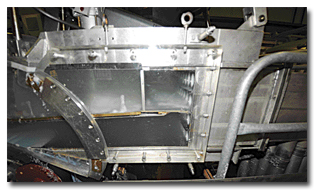 Production
The author also had the opportunity to view the Voith system. It is very rare that visitors are allowed in the paper and nonwovens production area. Here’s a look at the production process: Water, pulp and Tencel fibers are added to large containers and carefully stirred. Next, the fiber pulp is conveyed via a transport pipe onto the Voith HydroFormer™ paper machine. Depending on product specification, one to three layers can be combined in this process. Already, this flexible machine with high throughput capacity has been installed in more than 70 production plants. The production process can be closely monitored through windows on the machine.

Now, the Trützschler spunlace technology is applied: The wet fiber web is guided through the Trützschler AquaJet on a screen belt. Here, a machine equipped with special nozzles bonds the web by means of water jets. Now, the web features all the required characteristics. More than 100 AquaJet systems have been installed worldwide, making it one of the market leaders in this sector. 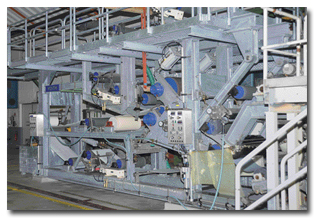 In this installation, the Voith HydroFormer is positioned with the Trützschler AquaJet to the left of the control cabinet.

The Solution (?)
The resulting nonwovens weigh  20 to 150 grams per square meter, and are produced at a speed greater than 400 meters per minute. Looking at samples, the author could see the functionality of the product. With the right finishing and the right weight, there is great hope that a solution to one of the biggest problems with modern nonwovens will be found in the near future.

Meanwhile, Trützschler Nonwovens and Voith Paper have reached an important milestone for their product: The new web successfully passed official Association of the Nonwoven Fabrics Industry (INDA) and International Association Serving the Nonwovens and Related Industries (EDANA) tests and was certified as flushable. The certificate gives impressive proof of the efficacy of the newly developed production process, whose core components are the Voith HydroFormer for web formation, and Trützschler Nonwovens’ AquaJet for web bonding.