ZURICH — December 9, 2022 — The 17th ITMF Global Textile Industry Survey (GTIS, formerly known as ITMF Corona-Survey) shows that on average the business situation in the global textile industry has deteriorated further in November 2022. At the same time, global business expectations in six months’ time remained in negative territory but did not get gloomier. The indicators for order intake, order backlog, and capacity utilization rate dropped, globally.

According to the survey, the business situation in the three Asian regions and Europe remained especially poor. In North & Central America the business situation has improved again markedly. Except for the textile machinery segment that still benefits on average from a long order backlog, all other segments found themselves in negative business situations, especially fibre producers and spinners. Global business expectations have remained negative but “stabilized” around -10 percentage points (pp) since July 2022. Expectations have improved significantly in South Asia to +10pp, and Europe to -30pp. Business expectations in all segments remain negative territory with four out of seven recording improvements. 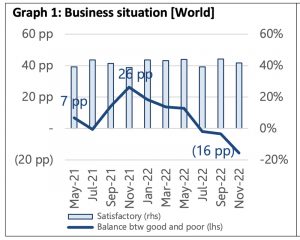 Order intake nose-dived in November, in line with weaker business situation and weaker demand, currently the biggest concern for the global textile value chain. Only companies in North & Central America registered on average a good order intake, while all other regions were faced with an unsatisfactory order situation. Except for South-East Asia and North & Central America order backlog fell. The only segments where order backlog increased were the down-stream segments garments and home textiles. Capacity utilization rate dropped in all regions in November 2022. It only increased in the textile machinery segment but fell otherwise. 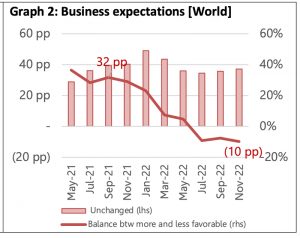 “Weakening demand” is by far the biggest concern in the global textile industry, followed by the root causes of demand reduction, namely high energy and raw material prices which lead to high inflation rates. Good news is that logistical costs are not much of a concern anymore. Concerns about geopolitics on the other hand have increased again in the past two months.