Natural or man-made textiles act predominantly as insulators. Conductive textiles are created by either coating a nonconductive substrate with electrically conductive elements or by embedding the conductive material within the substrate. These textiles are then used in antistatic applications, for electromagnetic interference shielding and infrared absorption, or in protective clothing for people working with explosives, among other applications. Wearable electronics bring a new application for conductive textiles, which can be found in sports and healthcare sectors where body conditions are monitored to provide health information. The wearable device market is predicted to reach $20.6 billion by 2018.

Most commonly, metal wires are drawn, woven or knitted into the textile to create a conductive fabric (See Figure 1). These techniques form 85 percent of the market. There are significant disadvantages in using these techniques however as noted in Table 1: 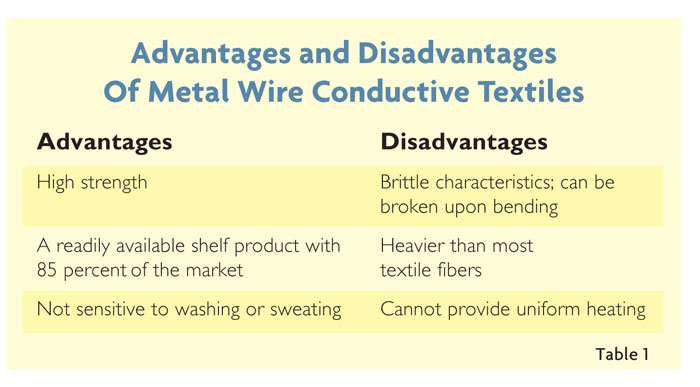 Sonication was used to make a stable SP1/CB dispersion by applying sound energy to N326 carbon black with the L3SP1 protein. The maximum SP1/CNP dry weight/weight ratio was 1:7, and the maximum SP1/CB concentration was 14.5 percent. Stability upon centrifugation was used as a quantifiable measurement of dispersion quality. The supernatant fraction of CNP remaining upon centrifugation was greater than 70 percent. The dispersion was stable for several months at room temperature. Figure 2A shows a high-resolution scanning electron microscope (SEM) image of the nanometric SP1/CB dispersion.

The polyester yarn was coated with the nanometric SP1/CB dispersion using a yarn batch dyeing machine in water-based solutions under mild pH and temperature. Screening for optimal coating was conducted using a coating machine from Italy-based Ugolini S.r.l. featuring 100 gram bobbins. The SP1/CNP loading was controlled by the number of binding cycles. Figure 2B shows a high-resolution SEM image of the polyester yarn coated with the SP1/CB dispersion. Coating with the SP1/CB dispersion dramatically increases the yarn surface area and its reactivity with palladium ion.

Electroless or chemical plating is a metal deposition method that does not involve the use of external electric energy. It involves a chemical reduction oxidation reaction in an aqueous solution for metal deposition on a non-conductive substrate. A high-performance polymer filament such as PET was used as the substrate for copper coating, which results in an electroconductive, yet flexible polymer/metal hybrid yarn. In this case, the yarn is activated by introduction of a palladium seed, followed by the copper deposition by using a commercial copper salt solution. One of the major drawbacks of this method is the high cost of palladium — at least $15,000 per kilogram (kg). For commercialization, the amount of palladium should be as low as possible using a cost-effective application method.

All steps in SPNano’s process are conducted using a batch yarn dyeing machines. First yarns are coated with the SP1/CB complex, followed by its immersion in a Pd+2 solution. A reduction step converts Pd+2 salt to form the active catalyst Pd0, leaving Pd nanoparticles on the surface of the yarn. Upon addition of the copper solution, the Pd nanoparticles initiate the electroless copper deposition reaction. The role of the coated SP1/CB coating is to provide Pd binding sites because pristine yarns or protein-treated yarns do not allow electroless coating under these conditions (See Figure 3). Since palladium is the most expensive part of the electroless copper process, it was important to reduce its quantity without affecting the yarn quality, particularly with respect to plating coverage. During the research, it was demonstrated that SP1/CB coated yarns display a high affinity for Pd. 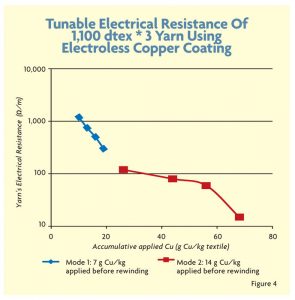 To further thicken the copper coating layer and improve uniformity, PET yarns were coated repeatedly, allowing more copper to attach to the fiber’s surface. However, there is a limitation on improving the resistance because a thick conductive copper coating above 3 microns reduces the flexibility of the yarn and leads to the creation of copper flakes. Figure 4 shows the electroless copper coating method in more detail using a 1,100 decitex * 3 yarn with high twist.

Factors that dictate resistance are: 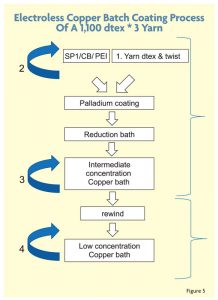 A hybrid metal-polymer filament may replace copper wire in signal wiring. Coating thickness and evenness affect the electrical properties of the coated yarn, where a thicker coating layer typically leads to lower resistance.